Sport Legacy Foundation works closely with Sport for Life International to set annual targets, ensure that funds are raised and all aspects of governance, safeguarding and risk management properly carried out .

Registered for the first time with the Charity Commission in February 2017, Sport Legacy Foundation has already attracted funding from Sport England, the Big Lottery Awards for All and the Home Office via the Building a Stronger Britain Together campaign. 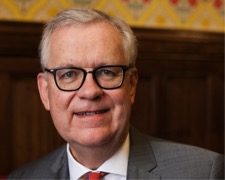 Chair of Trustees is The Lord Newby of Rothwell OBE

Dick has a long involvement in the use of sport to support educational and personal development. In 1997 he founded The Prince’s Trust Football Initiative and was its Chairman until 2012. He is a former Chair of IDS, UK Sport’s international development charity.  He was co-founder of Sport for Life International and established its educational programmes linked to major international cricket stadiums, including in Barbados, Trinidad and Pakistan.

Before joining the Government, he was Chair of Live Consulting, a corporate responsibility consultancy and Head of Corporate Responsibility at FD, the strategic communications division of FTI Consulting.

After Oxford University where he obtained a degree in English Language and Literature, Andrew worked in commodities for a number of years before qualifying as a solicitor. After practising in England, he moved to the Middle East where he became a partner in Fox & Gibbons (subsequently merged with Dentons). He was based in Dubai and specialized in company and commercial matters until 1996 when he started working in the energy business.

Andrew was legal director of Lundin Oil and then became legal director of Crescent Petroleum a company based in the United Arab Emirates. He has lived and worked in Malaysia, Switzerland, Qatar and the U.A.E. In the course of his business he has travelled widely in the Middle East and elsewhere, and specializes in upstream projects with particular emphasis upon long term international gas sales agreements.

He has two children and pursues an ever-decreasing number of outdoor and sports activities with little expertise in any of them.

Brenda is a Management Consulting strategist with almost 40 years of diverse working experience and a demonstrated track record in client transformational and change management assignments around organisational process and technology improvement across the Caribbean. A Barbados Scholar, with a BSc (Hons) from McMaster University, Canada and an MBA (Distinction) from Henley, UK, she also holds the CMC and CISA professional designations.

Brenda is currently managing director of ConsultBP an independent consulting company specialising in technology-enabled transformation. She is also a Director and Chief Project Officer at Global Integrated FinTech Solutions (GIFTS) a FinTech enterprise dedicated to creating a simple and secure payments infrastructure in emerging economies. She recently retired as Advisory partner at KPMG Barbados where for the last decade she also had overall responsibility for KPMG’s management consulting services across the Caribbean.

Brenda has been Chair of Sport for Life (Barbados) since inception.

Jane worked in FIS Ski, ATP & WTA tennis television production for more than ten years. She joined The Prince’s Trust as Commercial Head in 1997 co-founding The Prince’s Trust Football Initiative which has raised £1m annually for the Trust and reaches young people in inner city areas.

Jane’s belief that sport and education empowers and changes the life of young people carried on through her work at the corporate social responsibility company Live Consulting. She established Sport for Life International with Lord Newby in 2007 when it became the legacy programme of the ICC Cricket World Cup 2007 West Indies. Sport for Life learning centres were established in Barbados, St Lucia, Trinidad, St Vincent & The Grenadines and in Pakistan. Now Chief Executive of Sport Legacy Foundation, Jane’s experience in fundraising and commercial activity as well as social policy and programme delivery in diverse communities combine to plan and build more opportunities for young people through sport.